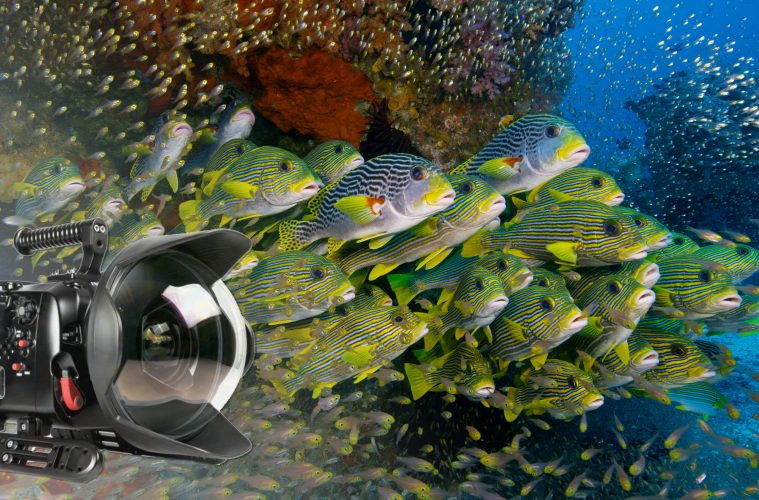 It’s a three-letter word that generates a pavlovian response in almost any underwater image-maker.  RED.  Their latest offering, the RED Weapon is capable of filming 8K raw video with over 16 stops of dynamic range at 60fps.  Even to those who might not fully understand the camera’s capabilities, it sits at the top of the camera wishlist (and literally at the top of DXOMark’s list with the Weapon Helium having the best image sensor they’ve tested).  A camera this amazing deserves amazing diving so we took the RED Weapon with the S35 Helium 8K sensor in a Nauticam Weapon LT housing to Indonesia to film the stunning reefs and marine life of Raja Ampat and Triton Bay.

For those unfamiliar with RED cameras, here’s a quick overview.

RED was one of the first to offer raw 4K video recording.  This is similar to the difference between shooting in jpeg or raw format on a still camera.  Most cameras that capture video are essentially capturing a sequence of compressed jpeg images that contain just the bare minimum of data.  Just like trying to edit a jpeg still image, you are very limited in what you can do in post.  Shooting in raw does not mean you are immune to shooting properly but it does give you a little more wiggle-room, especially when it comes to color correction which is really where underwater video tends to need the most work.

Over the years RED has stayed on the forefront, offering progressively bigger frame sizes and ever-higher dynamic range, moving from 4K to 5K, then 6K and now 8K at 16+ stops of dynamic range.  The size of the camera has also decreased making the newer DSMC2 “brain” even more portable and the resulting underwater housing smaller.

Why shoot 8K?  There’s lots of reasons.  Projection technologies are always improving and shooting footage now that will still be relevant in a decade is a good way to go if it’s in your budget.  Or, you can take that 8K and downsample it to 6K or 4K.  This gives the resulting video greater sharpness as well as the ability to sacrifice some of those extra pixels to maybe adding some zooms, pans, or even crops and stabilizations.  Another benefit, the still images you can pull from a video clip are also 35MP raw stills.

One of the biggest obstacles I faced, being in the field with only a laptop for several weeks with the camera, is storage and doing daily clip triage.  The camera records to a removable SSD hard drive.  They come in a variety of sizes, the ones I used were 512GB.  This bought me about 23 minutes recording time.  So think 1TB for every hour of footage.  This in and of itself is not a big deal but when it comes to doing daily clip trims you have to work with massive files that make even the latest and greatest laptop choke.  This means more time sitting in front of the computer and less time out shooting the amazing destination you are in or for that matter, sleeping.

With the compact size of the new RED DSMC2 cameras and the Weapon LT housing it’s possible to capture cinema quality 8K footage without bringing an entire production team on location.  Unfortunately, it’s still going to be awhile until we can watch the video above in full 8K.  Such is life at the bleeding edge.