Compact cameras have come a long way since the “point & wait” days when shutter lag, crummy sensors and poor optics made them nearly impossible to use effectively underwater.  With rising baggage prices and the latest batch of compacts outpacing even our previous DLSRs in specs and performance they’re gaining ground quickly in the underwater arena.  Sony’s latest RX100MKIV is an excellent blend of price, size and capability when housed in Nauticam’s NA-RX100IV  and paired with the new WWL-1 wide angle wet-mate adapter and CMC macro adapter. 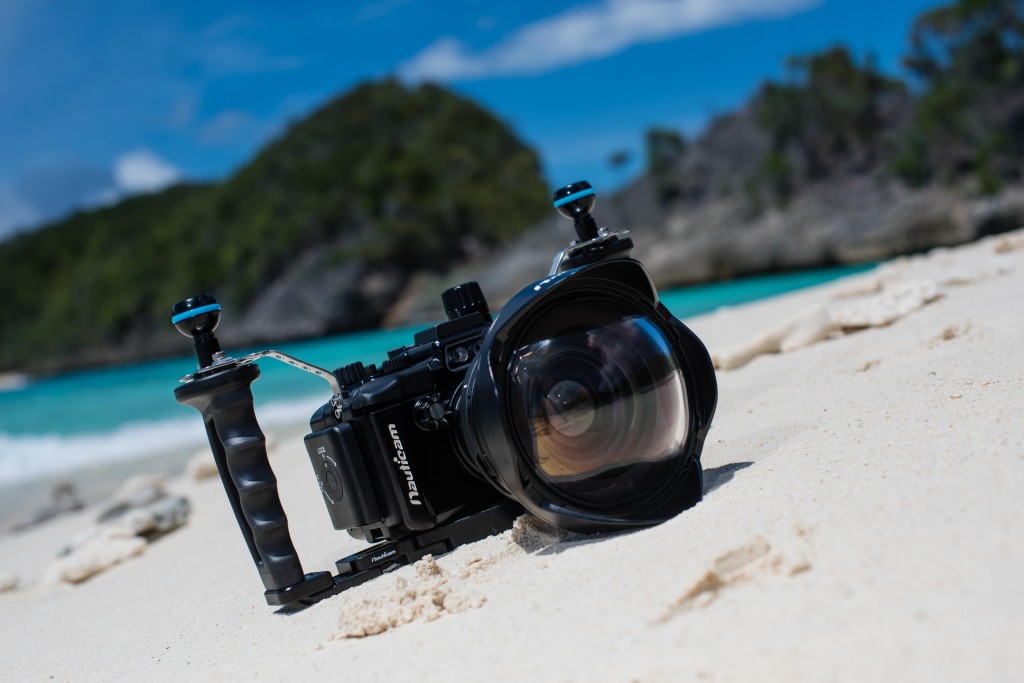 We’ve always preached that it’s not the camera, it’s what’s six inches behind it pushing the buttons that makes the difference. We decided to practice what we preach and left the D810 on the boat to shoot exclusively with the Sony RX100MKIV in Nauticam’s new housing for one of our three back to back Raja Ampat trips. Here’s some of our favorite shots followed by a more thorough review of the system.

The Sony RX100MKIV is the fourth iteration of this 1” CMOS sensor fixed lens compact camera. With a maximum aperture of F/1.8-2.8 and an equivalent field of view to a full frame 24-70mm lens the camera seems perfect for general or advanced topside photography but a bit on the narrow side for underwater shooting. When mated with the WWL-1 wet mate lens, which conveniently bayonets to the front of the Nauticam housing with the supplied adapter, generates an impressive 130º field of view at 24mm. This super wide spread also comes with an amazingly close focus range, within centimeters of the port, and super sharp corners.

The WWL-1 wet mate lens, which conveniently bayonets to the front of the Nauticam housing with the supplied adapter, generates an impressive 130º field of view

On the RX100MKIV when shooting at 24mm the port shade from the WWL1 is visible in the images, however it is easily removable with only four finger screws. This also makes lighting close subjects a breeze as there are no shadows from the port. We rarely had any issues with flare, even with the shade removed. The supplied neoprene protective cover is still usable, even without the shade attached.

The camera itself is not mounted on a tray, it simply slides into the housing. There are no buttons that need to be pulled out or moved to ensure proper fit making setup a breeze. The downside of this setup is that the camera can move ever so slightly in the housing and, as a result, most 24mm wide angle images will need a small amount of crop to remove visible corners of the port (vignetting), especially when using the WWL-1; the corners needing repair changes based on camera angle so compose a bit wider than you will need or zoom in slightly to around 27mm. 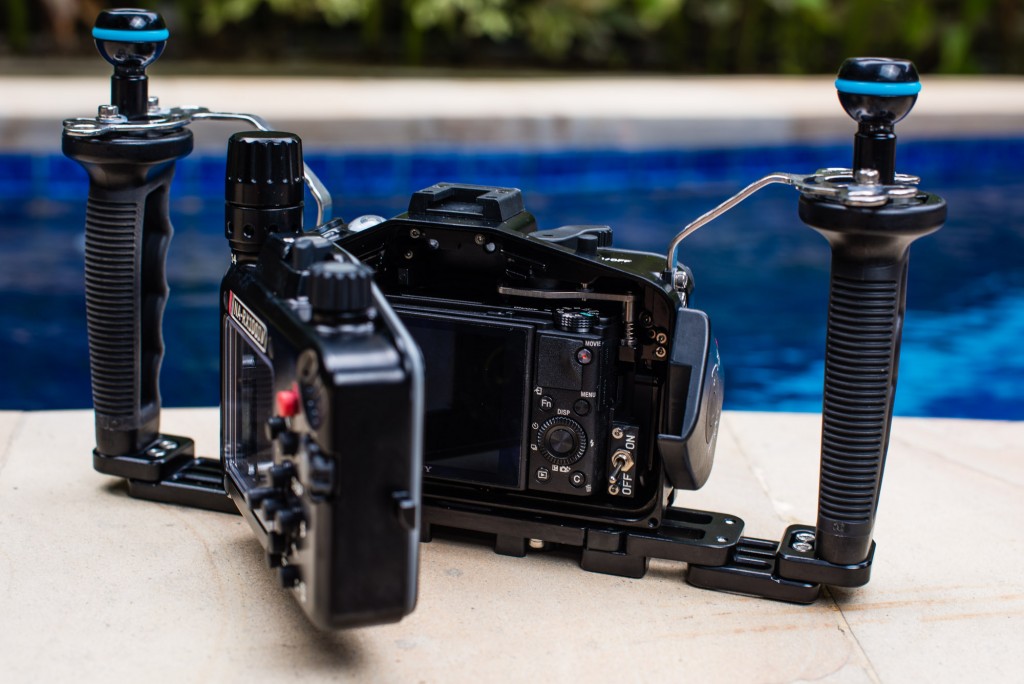 The internal pop-up flash is deployed with a small switch at the rear of the camera. When activated, the flash springs up and toward the front of the camera body to minimize shadows from the lens when used topisde. The NA-RX100IV housing has controls for deploying and retracting the flash underwater. However, if the camera is placed into the housing with the flash up, it is not possible to retract it so it is better to place the camera in the housing with the flash stowed and deploy it with the provided lever. Retract the flash before opening the housing and removing the camera. This, along with proper pre-dive flash testing should minimize issues with the internal flash not firing due to misalignment.

The camera has both fill and rear-sync flash settings. Both are essentially TTL and using it with optical-TTL enabled strobes such as the Inon Z240 or YS-D1/2 will allow for TTL control of the strobes. We prefer manual control so we set the flash setting to rear sync (to make sure the shadows trail the subject at lower shutter speeds) and adjusted the flash exposure compensation to -3EV to ensure quicker recycle time.

The RX100MKIV allows the user to customize buttons. By assigning the “C” button to control Flash Exposure Compensation, those users shooting TTL will have easy access to adjusting the flash power from -3EV to +3EV in 1/3 EV inrements using the rear dial. 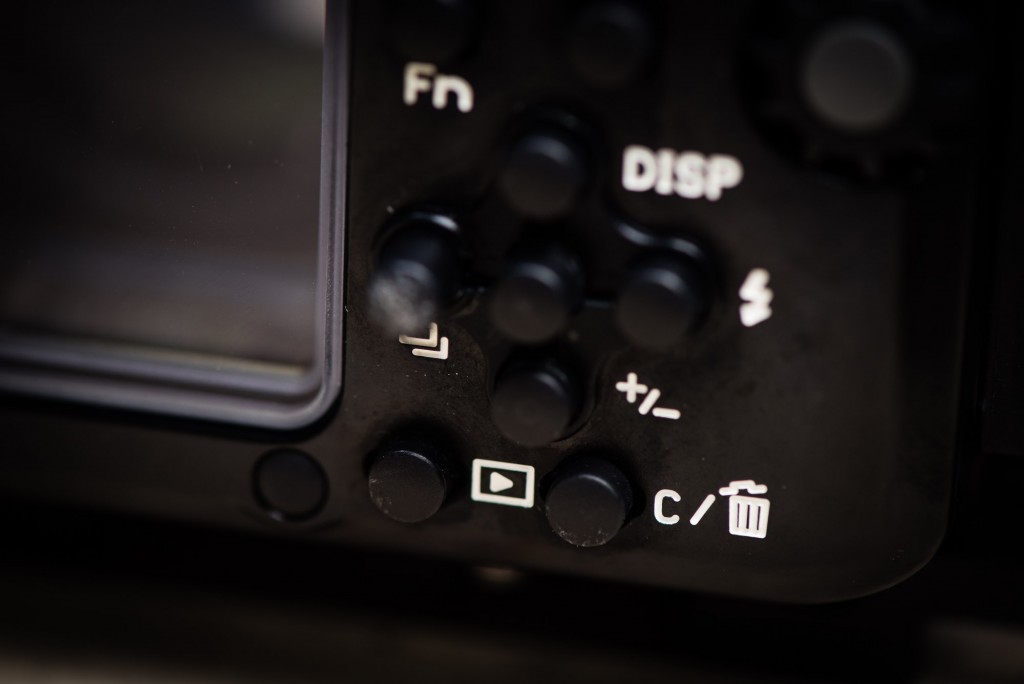 The “C” button’s function can be customized

The shutter of the camera can be set to use either the mechanical or electronic shutter or setting it to “AUTO” allows the camera to choose.  Using the mechanical shutter still allows the use of extremely high shutter speed while still using strobes, topping out at 1/2000 sec.  This is excellent for capturing beautiful sun balls in your wide angle scenes even with a small 1″ sensor.

With full manual mode the aperture and shutter speed can be controlled using easily accessible, albeit small, dials on the front and rear of the housing’s right side near the shutter release button allowing for easy one-handed operation. The shutter speed dial, which is the rear wheel on the camera, also performs custom functions when pressed (as opposed to turned). Occasionally while rapidly changing the shutter speed the top of the wheel is accidentally pressed. To prevent this from activating the shooting mode menu, use the customize function option to assign this button to be “not set”.

Rear of the housing

There is a pop-up electronic viewfinder but this cannot be used when the camera is in the housing. The 3” LCD is perfect for composition and reviewing of images and is viewable even in bright conditions.  We  suggest setting the brightness and quality of the LCD to their maximums. An RGB Histogram can be displayed as well for more accurate exposure judgement.

The WWL-1 is an awesome piece of kit. It turns the fairly narrow 24mm into a super wide 130º close focusing, sharp cornered wide angle heavy hitter. The lens is zoom-through so if necessary you can zoom the camera to its 70mm equivalent setting or simply remove the WWL-1 underwater as it is merely bayonetted onto the port. 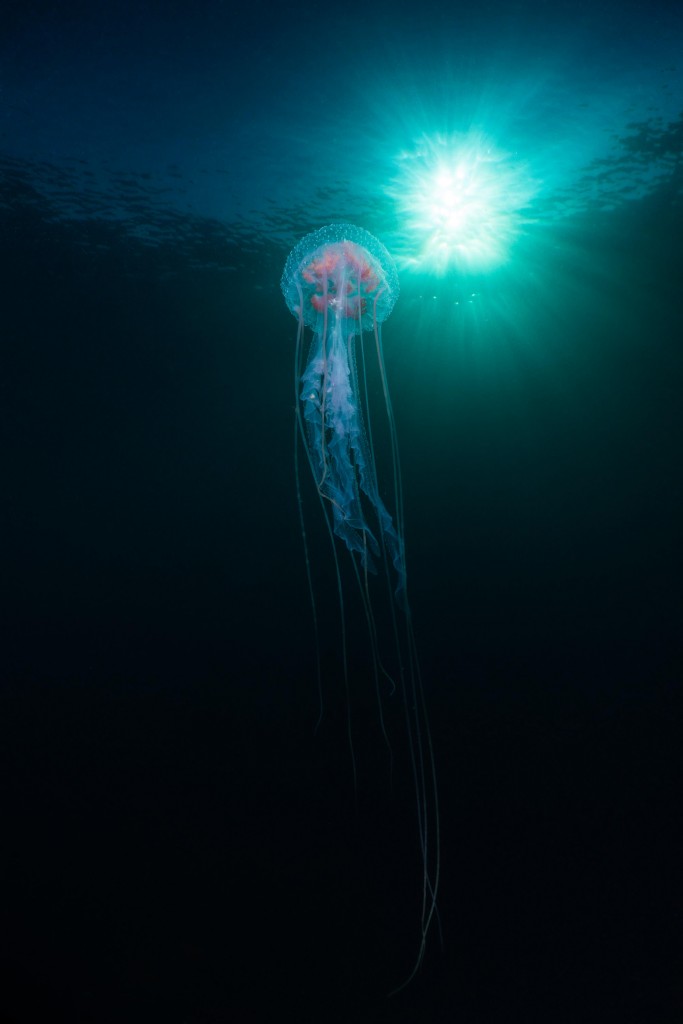 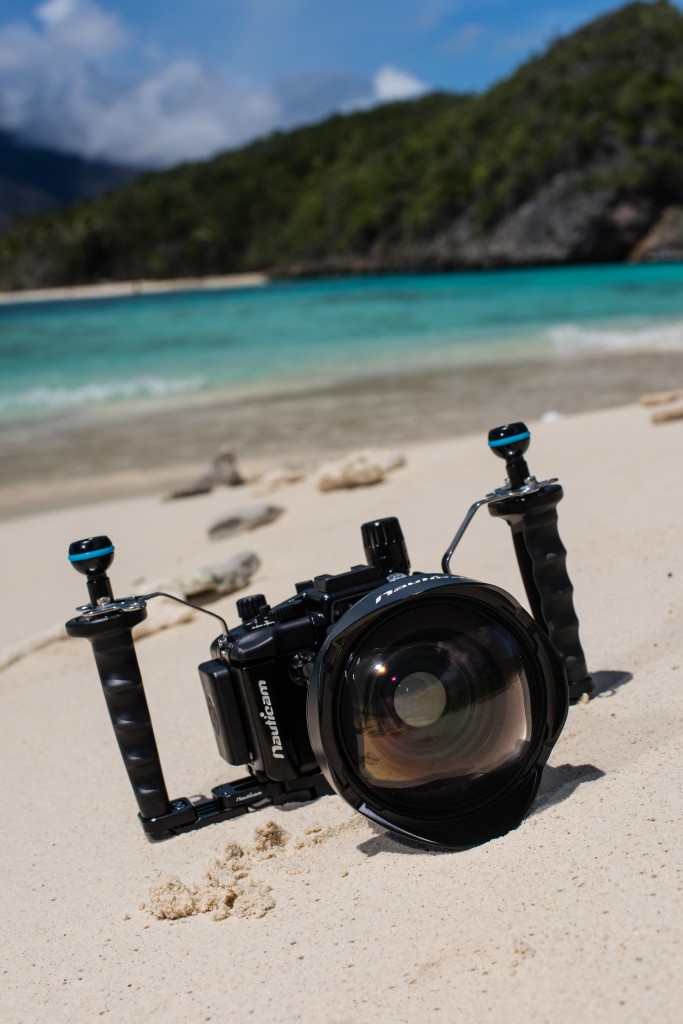 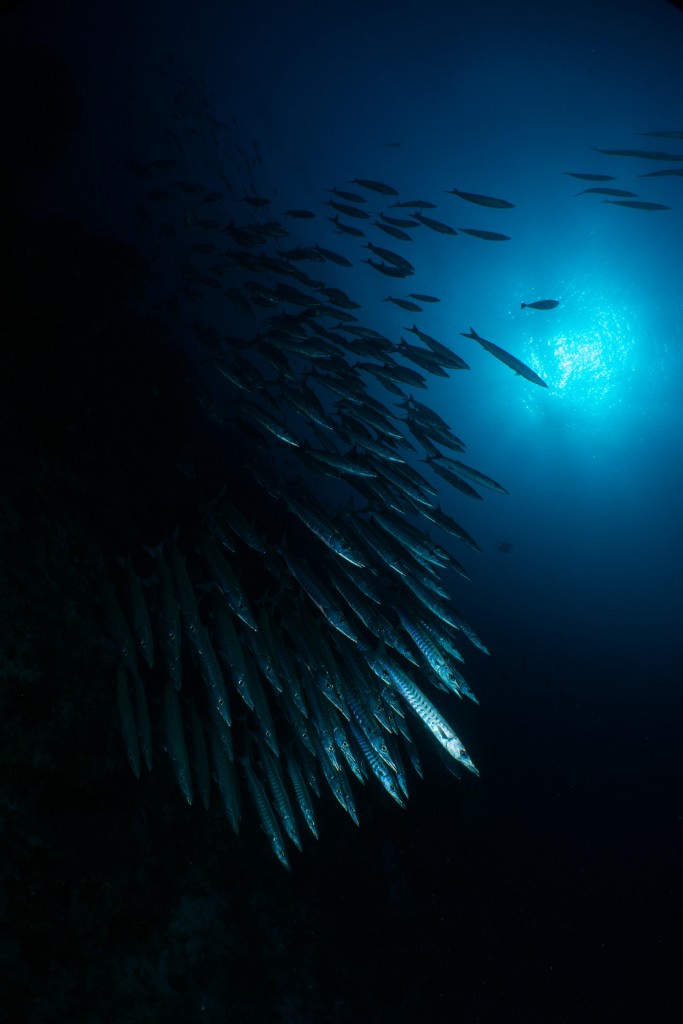 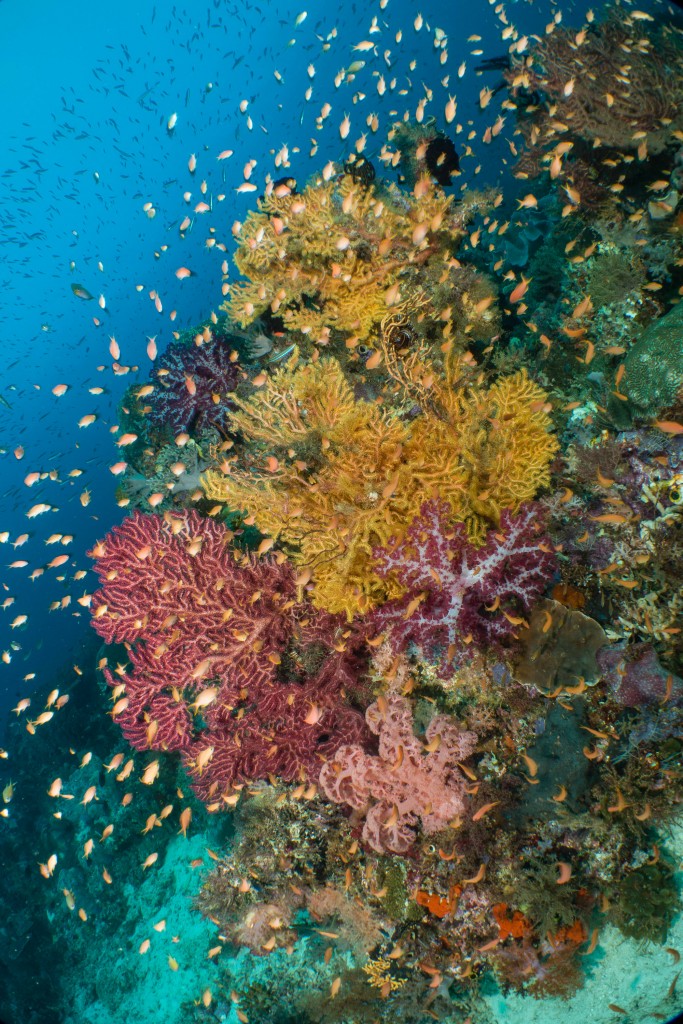 With several autofocus modes to choose from you can choose a mode that suits your shooting style.

The WWL-1 is heavy. We used a combination of 6” and 8” Nauticam carbon float arms to help offset the weight of the lens. Using an ultralight cold-shoe adapter we mounted the storage bayonet system with the CMC above the housing on a 6” ultralight arm. This has the added benefit of functioning like a fulcrum to help get the camera in the right position for one-handed shooting under ledges or at other odd angles by leaning the arm forward or backward in relation to the housing. With this the setup comes close to being neutrally buoyant (with Inon Z-240 strobes). 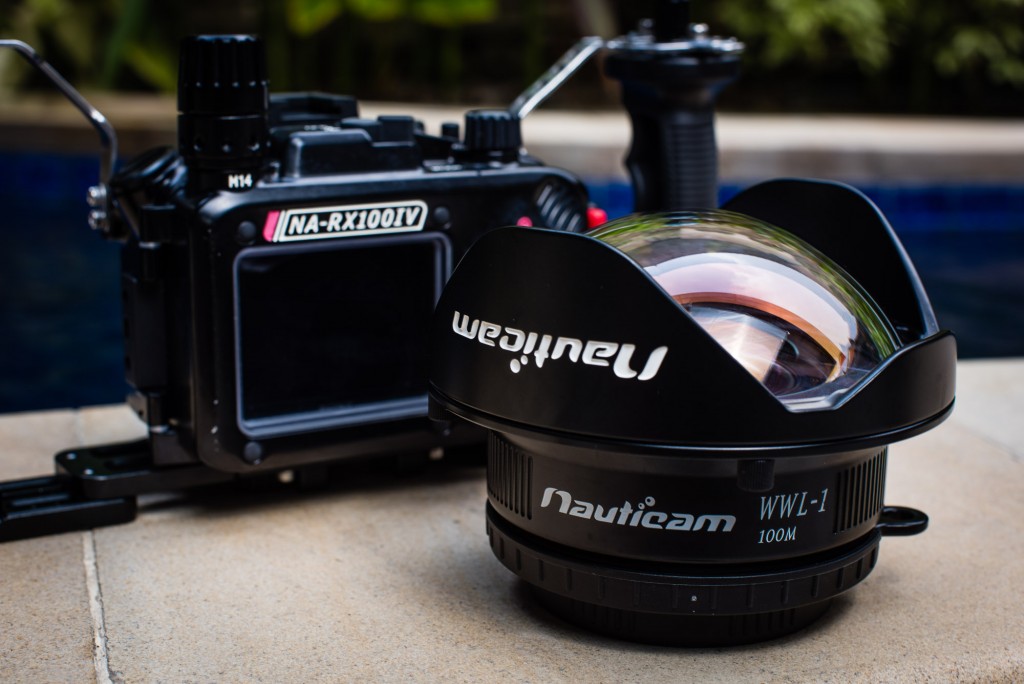 The only shortcoming for wide angle is the Sony battery (a common Sony and other Non-SLR cameras complaint we also had with the A7RII). It’s a one dive battery. Additionally the recycle time of the internal flash (even when set to the minimum -3EV setting) is not good and definitley caused us to miss a few shots, especially with fast moving subjects like mantas. Even when turning on all the power saving features the battery will not reliably be able to go through two dives of moderate shooting. Both of these issues can be overcome and do not outweight the exceptional capabilites of this camera for wide angle.

Paired with the CMC and its bayonet adapter one can shoot pygmy seahorses and mantas on the same dive with a simple wet-mate lens swap. The camera on its own has a pretty poor close focus range of 0.3m at 70mm so a diopter like the CMC is necessary for achieving true macro capability. 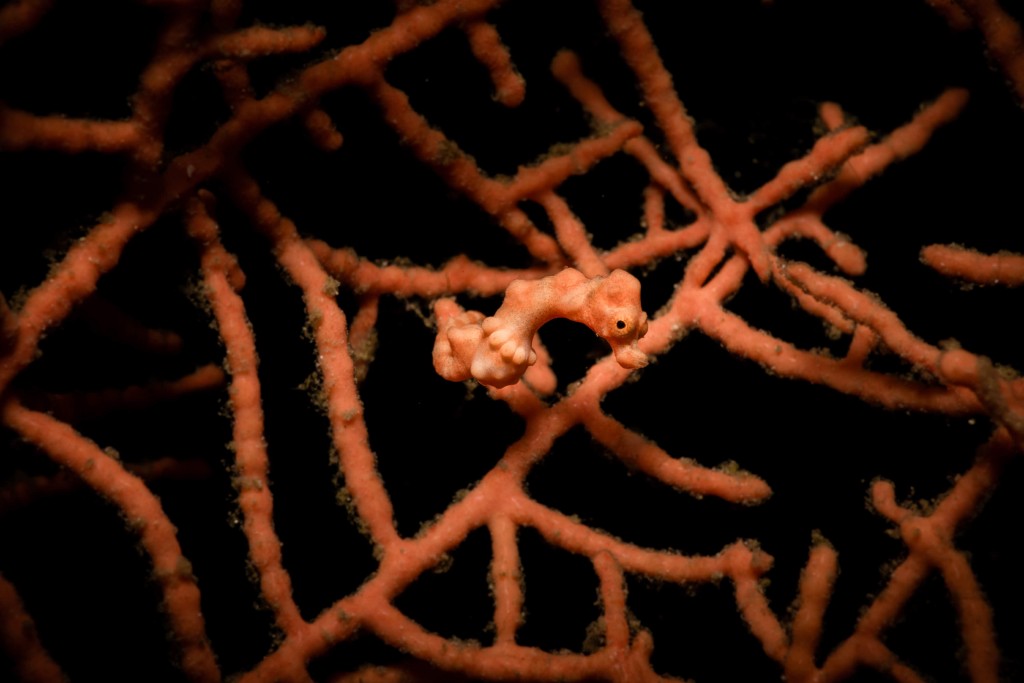 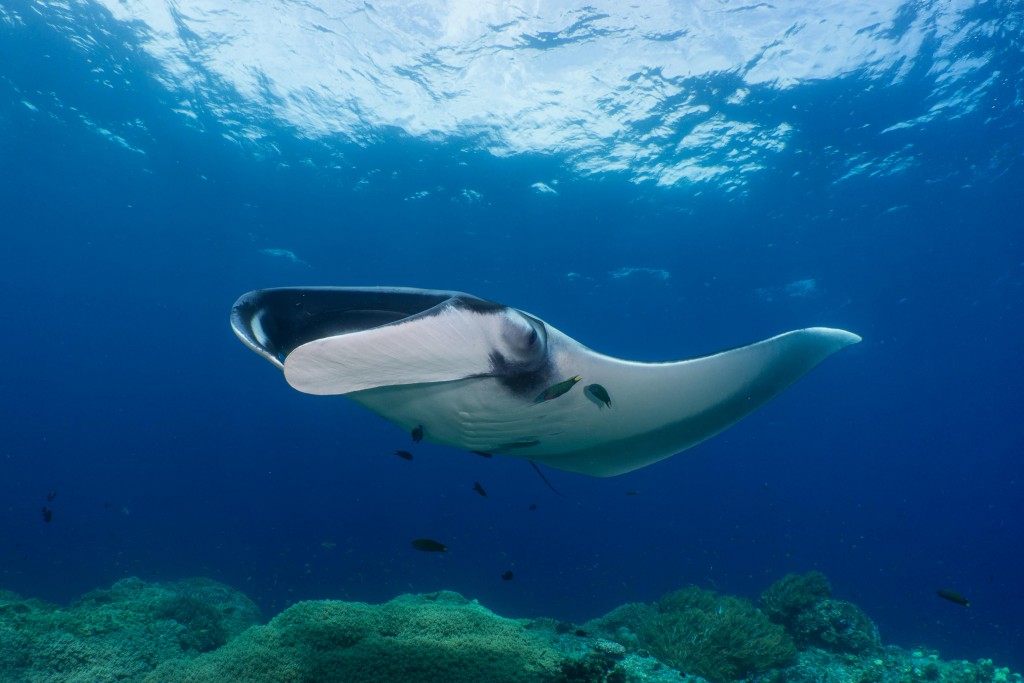 The camera features a very user friendly manual focus mode that still allows for full manual exposure control. When shooting the majority of macro you can run a high shutter speed to cut down on ambient light in the image. Normally the rear dial would now control shutter speed but by pressing the “+/-“ button you change it to control Aperture instead and focus with the front dial when in manual focus mode. An on-screen tooltip will tell you the focus distance chosen. 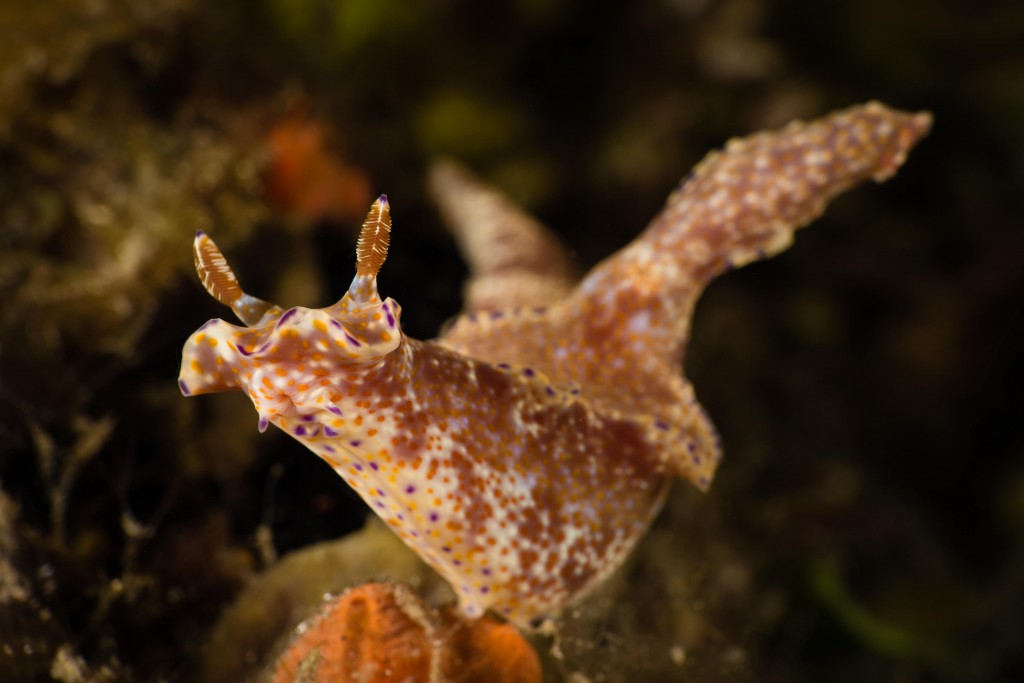 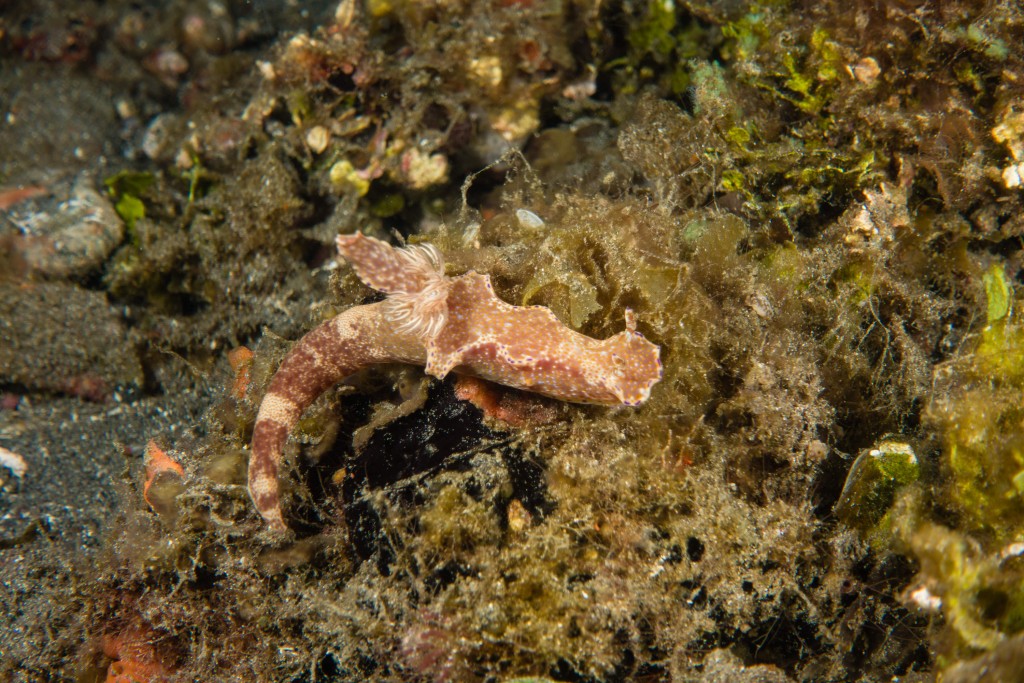 The working range of this camera in macro makes it difficult to serve as a dedicated macro camera. Without the CMC and a closest focus distance of 0.3m at 70mm subjects will appear quite small in the frame. With the CMC the camera can capture smaller macro and even supermacro subjects quite well and with beautiful bokeh thanks to it’s minimum F/2.8 aperture (1.8 at 24mm). We use the minimum ISO of 80 and turn on the camera’s ND (neutral density) filter setting when shooting macro, especially when working at lower apertures. 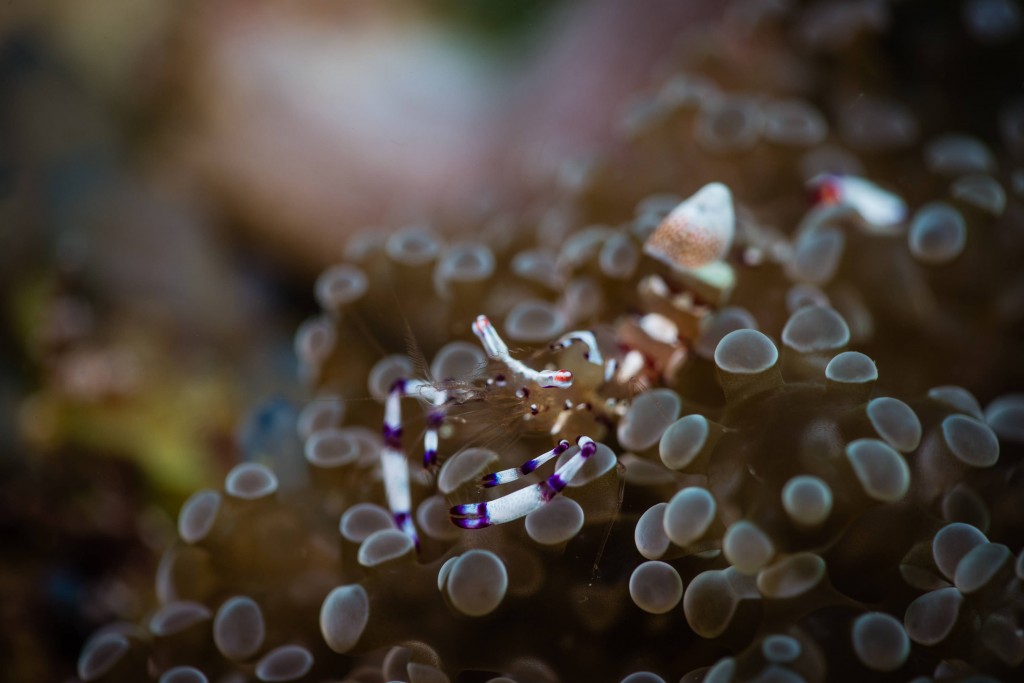 Beautiful bokeh effect for a 1″ sensor

Lighting at maximum magnification can also be a challenge as the working distance becomes quite small but is manageable once you get the hang of it.

When paired with the WWL-1 and NA-RX100IV housing, the Sony RX100MKIV is one of the most fun and capable wide angle rigs out there and produces impressive images. The ability to shoot macro and wide on the same dive is awesome and addictive but the limited macro ability makes it not our first choice as a dedicated macro rig. Think of it as being similar to a luxury SUV. Sure, it can go off-road but that’s not what it excels at, even if it’s pretty good once you leave the pavement. 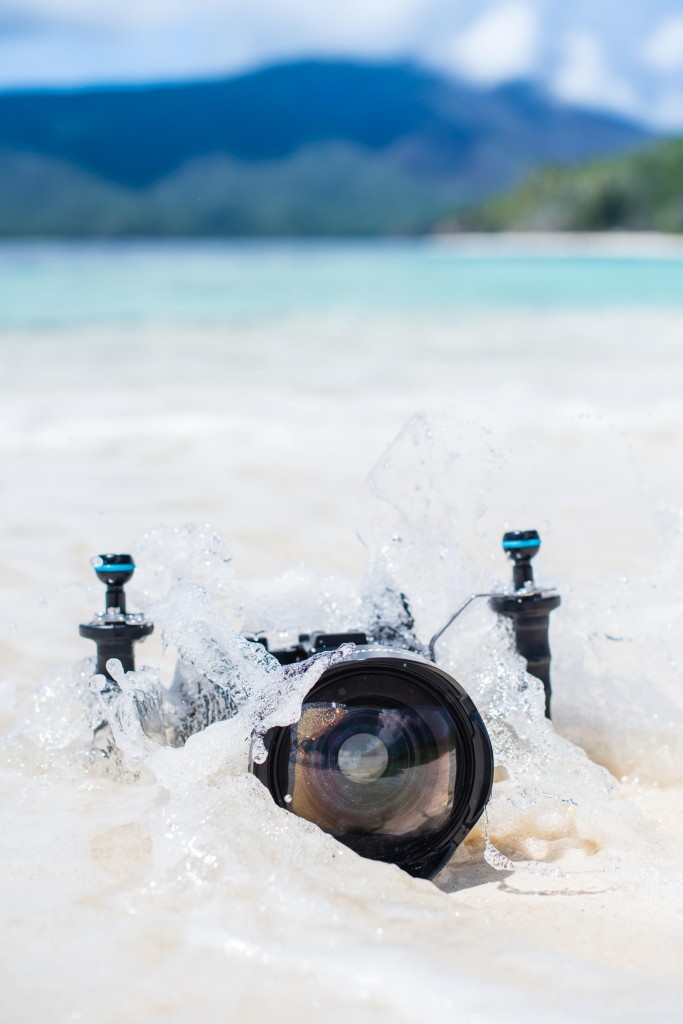 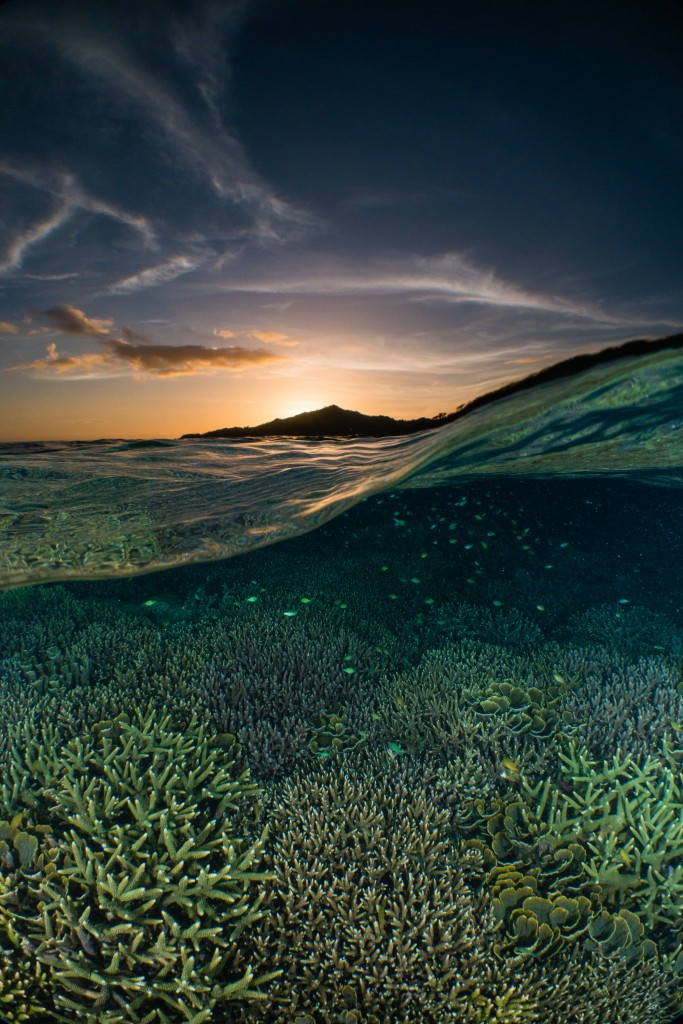 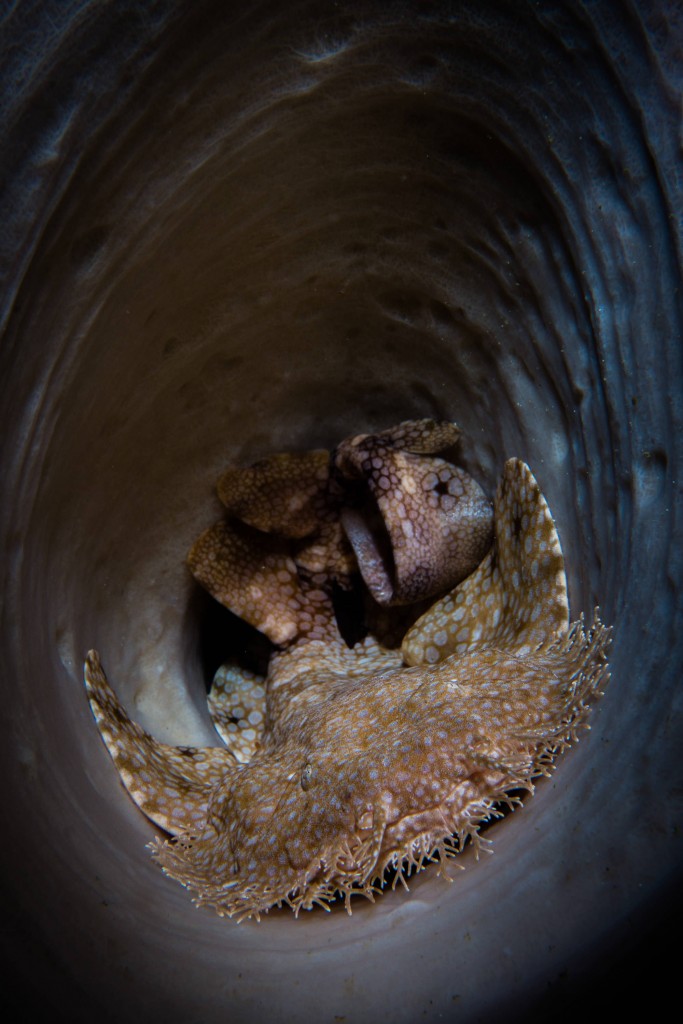 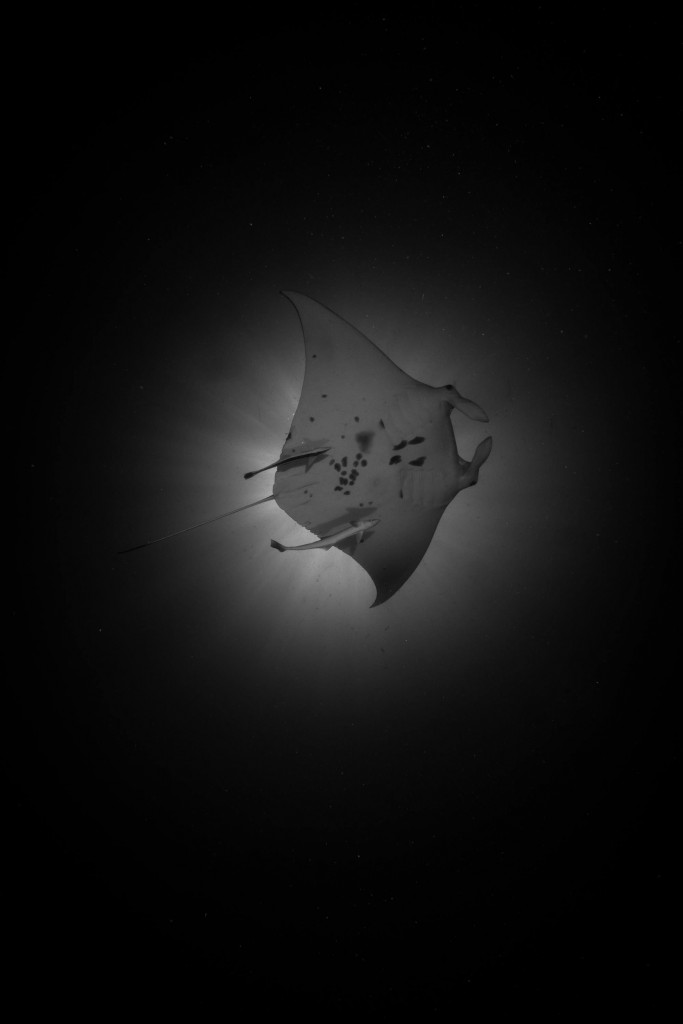 If weight and price are an issue but you don’t want to sacrifice wide angle performance and the ability to shoot some macro as well, the NA-RX100MKIV with the Nauticam WWL-1 and CMC should be at the top of your list.

ALL EQUIPMENT KINDLY PROVIDED BY NAUTICAM USA FOR TESTING PURPOSES